Exoskeletons and robotics in materials handling

Where will automation take us next? Ruari McCallion looks at some of the superhuman technology that’s beginning to change warehouse life as we know it.

The automation of warehouse functions is an inevitable response to labour shortages, changes in shopping habits – from high street to online and home deliveries – and the small but discernible and growing trend to ‘nearshoring’: bringing manufacturing closer to goods’ final markets.

Labour is expensive in the developed markets of Europe, and repetitive, low-skilled tasks – such as palletisation and depalletisation – have been significantly automated for quite some time. Automation of such low-level tasks is not the ultimate destination, however. The use of RFID tags and IIoT (industrial internet of things) technology makes it more feasible to look towards programming robots to undertake a wider array of activities.

There is a growing role for human operatives with augmented mechanical assistance. Exoskeletons – wearable mechanical equipment – blend mechanical advantages of strength with human flexibility, adaptability and thinking. But it’s not just about being able to lift greater weights in interesting ways. 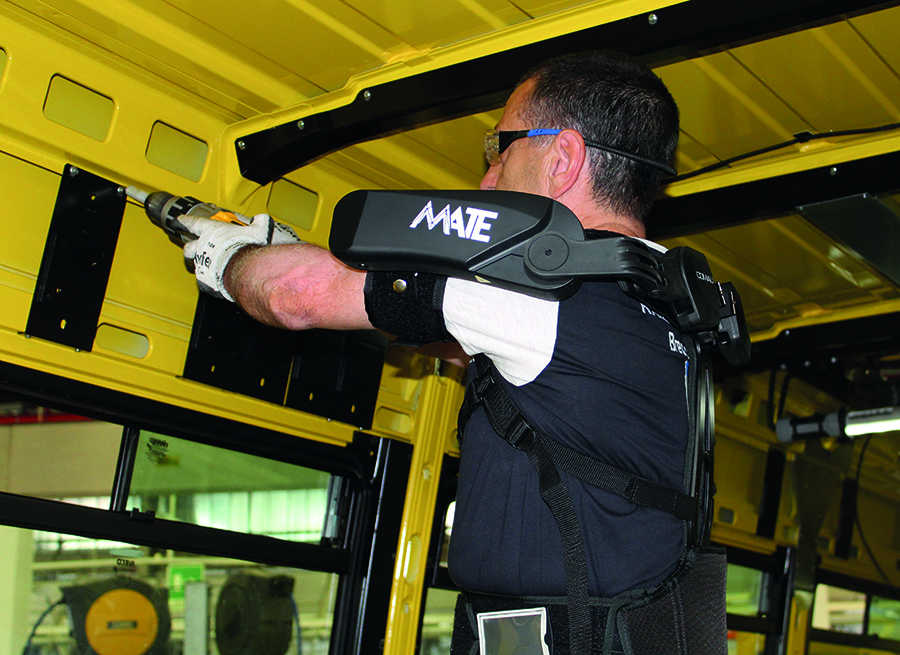 Compact, lightweight exoskeletons are easy to wear in restricted spaces, hot conditions and other difficult environments.

The original versions of exoskeletons were pretty chunky; the latest models are lighter, more wearable and more adaptable.

“Exoskeletons are used in particular for repetitive tasks involving continuous use of the upper limbs and shoulders, or frequent loading/unloading operations,” says Nigel Hyland, Head of Customer Management in the UK at Comau, the Italian-headquartered industrial automation and robotics company. “The devices reduce physical strain and improve workers’ quality of life.”

The original versions of exoskeletons were pretty chunky; the latest models are lighter, more wearable and more adaptable. Comau’s latest offering, the MATE-XT, has a slim, lightweight carbon fibre structure and is water, dust, UV-light and temperature resistant. This means it is usable in difficult environments, including outside facilities in hot and sunny areas. It is designed to replicate the user’s physiological shoulder movements and to provide upper body support without batteries or motors, which saves weight as well as making the equipment more reliable.

Comau estimates that it can help workers increase accuracy during overhead tasks by 27%, boost execution speed by 10% and reduce cycle times by more than 5%. From the user’s perspective, it reduces the risk of muscle strain by a claimed 30% and diminishes perceived effort; more than half the workers asked reported ‘beneficial upgrades in job quality’. 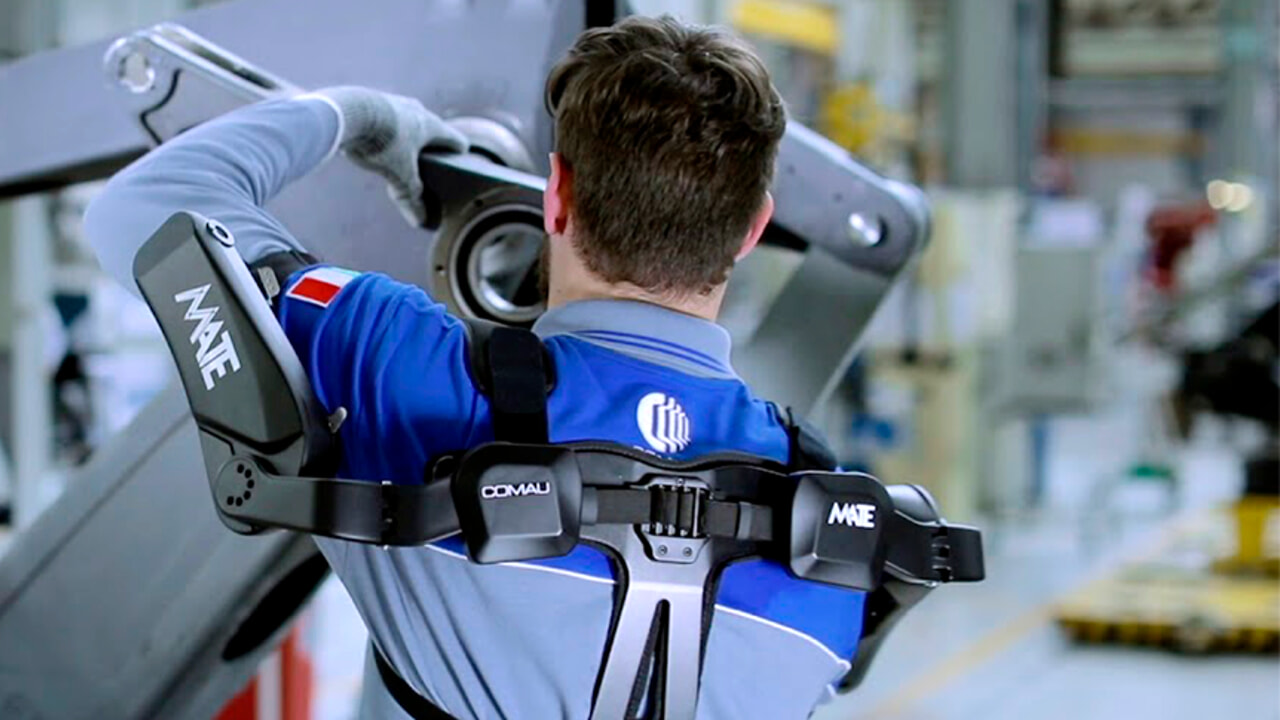 There is a growing role for human operatives with augmented mechanical assistance.

Taking the next step

Comau and Ossur, an Icelandic company operating in the field of prosthetics and orthotics, have invested in IUVO, a spin-off company of Scuola Superiore Sant’Anna (SSSA) in Pisa and its BioRobotics Institute. They are developing a wearable robotics solution to improve the ergonomics of operators engaged in manually moving loads at Esselunga, a leading Italian retail trade company. The exoskeleton will assist the back muscles during lifting and handling tasks, helping to reduce physical effort and fatigue. Comau is leading the engineering process; IUVO is tasked with conception, development and testing of wearable robotic technologies. Testing began in the first quarter of 2022; the first lumbar exoskeletons were scheduled to be available in Q2 of 2022.

UAVs: the road to lights out?

Eureka has reported on developments with unmanned automated vehicles (UAVs) and drones several times over the past few years. Their presence and use is growing – especially in situations of high-frequency goods movements and where human personnel are either unavailable or the operating hours and conditions are unattractive or even dangerous.

“The next step, and the key to ultimate efficiency, is to fully automate warehouse logistics,” says Stewart Goulding, Managing Director of EMS Ltd, a leading supplier of precision small DC motors and linear actuators in the UK. “Lorry loading and unloading has previously been a difficult step to automate. One reason for this is that artificial vision systems can have difficulty distinguishing where one box begins and another ends in a crowded trailer. A robot may find it hard to rummage through a jumble of boxes if they have fallen over in transit, or to pick up an object with a complex shape. There’s also the varying weights and sizes of cargo that the robot must contend with.” 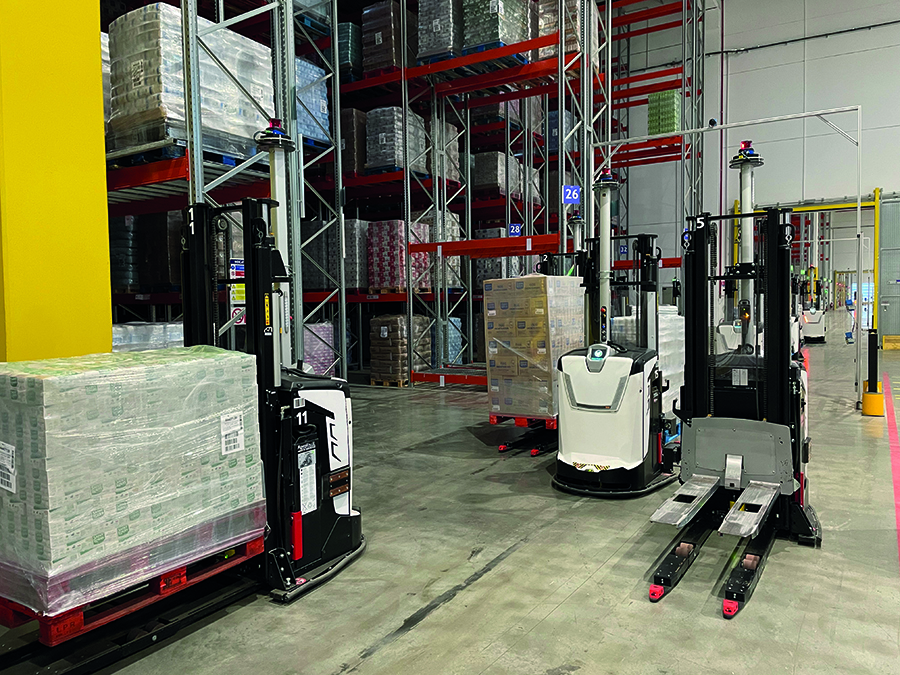 While automated solutions like AGVs reduce the need for personnel, exoskeletons combine mechanical strength with the advantages of human flexibility, adaptability and thinking.

Stewart Goulding maintains that the key to ‘lights-out operation’, the complete automation of the warehouse, is vision systems.

But UAVs and similar solutions are not total replacements for personnel. Robots used for repetitive tasks are not the best equipped to cope when things deviate from the norm, but they are catching up and their vision systems are getting better.

“Machine vision is essential in many operations in the warehouse, such as guiding robots and AGVs,” says Ofer Nir, Vice-President of Products and Marketing at Inspekto, a German-Israeli industrial company particularly focused in the DACH (Germany, Austria and Switzerland) region. Robotics company Mahle is among its investors. “Machine vision is a great alternative to manual QA (quality assurance) for incoming goods, as well as packaging.”

Traditionally, machine vision systems have been viewed as necessary but expensive and complex. Because of that, they have been focused on production lines, rather than warehouses, but they are getting cheaper and less complex. Plug-and-play systems are more widely available and autonomous machine vision systems can now be installed quite quickly, by non-experts, following a simple procedure, according to Ofer Nir.

Lights-out warehouses are an increasing possibility, but it is more likely that we will see the same in logistics as we have in manufacturing: humans and robots working alongside each other.