‘5G’ – Fifth Generation mobile communications technology – is coming down the road very rapidly. Among the claims made are that it offers some significant improvements for the advanced factory and the potential for an automated warehouse. It offers lower latency, faster reaction and the opportunity for Edge computing that can provide greater local control. Ruari McCallion cuts through the jargon to the heart of the matter.

It seems that hardly a year goes by without the emergence in business of a new acronym or buzz phrase. The two that are supposedly ‘on everyone’s lips’ now are ‘5G’ and ‘Edge computing’. Naturally, we are assured that they will transform all aspects of business and usher in a new dawn of clean, fast, transparent, hands-free operations.

History and experience tell us that such claims are rarely matched by the reality.

The ongoing pressures to produce faster, with fewer errors, and to deliver on time, just in time, and definitely in full, with warehouses that are inevitably getting fuller and having to do more, probably with fewer people, make automation inevitable.

However, the other side of the coin is that IT systems are having to cope with levels of traffic beyond those they were designed for, over communications networks that slow down, the more they are used. Sometimes, you can be forgiven for thinking that a runner with a cleft stick would be faster at getting messages to the right destination and confirming receipt. If 5G and Edge computing can genuinely give systems a much-needed boost and make their lives easier, then materials handling professionals will want to hear about it.

What does it mean?

First, let’s cut through to what 5G is. It is the next generation of wireless mobile communications technology, which will use both new radio wavelengths and next-generation software to boost capacity and speed. It will be using shorter wavelengths, which means shorter range, so the mast on the hill two or three kilometres away will not be the source of your 5G signal; it’s more likely to be the pole on the street corner above you.

Edge computing is a lot less complicated than some may fear; in some ways, it’s a step back into the past. Edge is a “mesh network of micro data centres that process or store critical data locally and push all received data to a central data centre or cloud storage repository, in a footprint of less than 100 square feet,” according to research firm IDC.

The new architecture for data transmission and processing in automated systems.

Close to the Edge

An ‘Edge computer’ is not a new piece of hardware: it’s a description of a connected item. Cars and factory floor manufacturing machinery could all be considered as being ‘Edge’, as they are producing data. Their data will be transmitted elsewhere for analysis, operational management and to help with process improvement. Often, all the data will go off somewhere else – to a central server, for example. That unit may be in ‘the Cloud’: an off-site, secure location, operated and managed by IT specialists.

Using the Cloud is a great idea, in the same way that using the bank to hold and securely store your money is a good idea. But the modern enterprise requires access to its data pretty much 24/7 and it is much more complex than simply paying a bill, receiving a payment or running the monthly payroll. As factories and warehouses become more complex, with more IT involvement, the communications routes become less Information Superhighway than Urban Freeway at rush-hour.

Edge reverses the off-site trend, to an extent. In doing so, it claims to boost communication speeds, shorten response times and make increasingly autonomous automation possible.

If you want to communicate faster, then you have two choices: you boost the capacity of the devices, or you bring the service centre closer. Edge computing employs a ‘gateway’ that (effectively) triages the information coming into it. Data from IIoT (Industrial Internet of Things) devices will be analysed ‘at the edge of the network’ (hence the name), before being sent to the appropriate place – the data centre or the Cloud. Or – crucially, for logistics and materials handling – it will be acted upon in the situation.

It is infrastructure that enables data to be processed as close to the source as
possible. It facilitates faster processing and reduces latency – the time taken for a packet of information to make the trip to its destination and return. It’s not that it breaks the laws of physics and transmits faster than the speed of light; it is that it will process data as close as possible to the point of origin, thus reducing the number of steps a packet has to take, and cutting down the distance it has to travel. 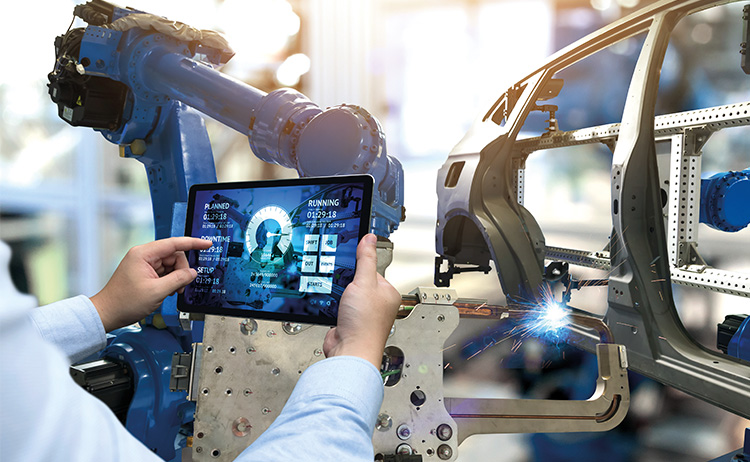 Faster communication is vital to smart factories and warehouses.

According to Orange Business Systems, 5G communications are integral to Edge computing, effective digitisation in industry and the exploitation of the potential of IIoT and the Fourth Industrial Revolution. Its higher speeds, shorter latency and greater capacity facilitate IIoT.

GSMA Intelligence predicts that the number of 5G connections around the world will have hit 1.3 billion by 2025, covering around 2.7 billion people, or roughly 40% of the global population.

What does it mean for logistics and materials handling professionals?

We are increasingly familiar with AGVs – automatic guided vehicles – but they are restricted to pre-determined routes and tasks; their ability to be genuinely autonomous and to employ AI (artificial intelligence) to learn about their environment and to make decisions is limited by latency. 4G’s latency standard is 25 to 100 milliseconds – which is simply not fast enough for AI. Human beings process information when they see it and make decisions accordingly; autonomous machinery has to be able to perform at pretty much the same level.

5G latency is in the single-millisecond range. It can operate very effectively over short distances, which makes it ideal for operations within factories and warehouses. Genuinely ‘smart’ materials handling vehicles, unmanned warehouse transportation and automated time-consuming activities and processes become not just possible but realistic. It also improves the performance of augmented reality (AR) and virtual reality (VR). 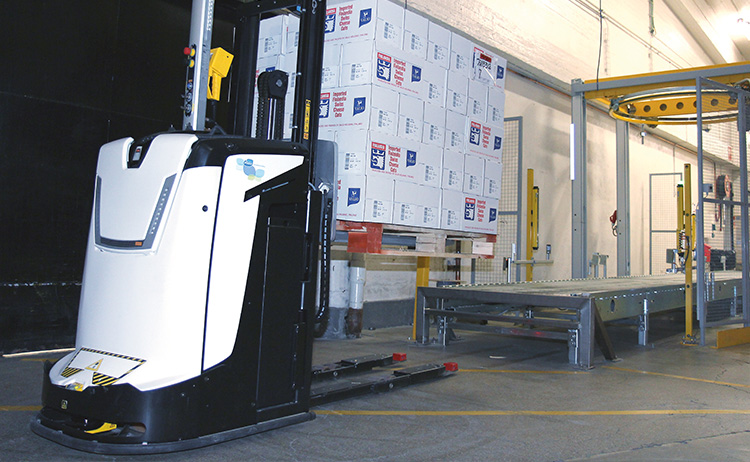 5G and Edge computing may be keys to developing truly autonomous AGVs.

Breaking through the blockage

We have learned from experience that every advance in telecommunications stimulates more usage – and concerns, both well-founded and unfounded. Allegations in the second category include ‘damage to birds’ and the old favourite: ‘cancer-inducing microwaves’. Both have been thoroughly debunked.

In the former category is the downside about increased efficiency attracting more usage. Consumer traffic provides financial security to telecoms networks but it becomes a problem when it gets in the way of business. The only way of providing distinct segregation with previous systems would have been to physically separate networks.

“Network slicing is a new feature that has become available in 4G and will be available as standard in 5G,” I was told by Jean-François Fava-Verde, Innovation Lead – Digital with Innovate UK, and previously head of telecoms at Orange. “It enables multiple virtual networks to run over shared physical networks.” The principle of disaggregation can apply with wireless networks.

Orange is introducing a platform designed for demonstrations in the Opéra district of Paris and is conducting technical end-to-end 5G tests in Lille, Douai and Marseilles, running until mid-2019.

Autonomous, AI-operated lift trucks are not yet with us but the enabling technology is being developed, right now, and will be deployed within the next three to four years. It will be worth investigating to see if it meets your needs. •

A viral news story circulated in 2018, claiming that a mass die-off of birds in the Netherlands was caused by 5G testing. Fact-checking organisation Snopes.com examined the evidence and concluded that the report was false. Full information is available via the following link: 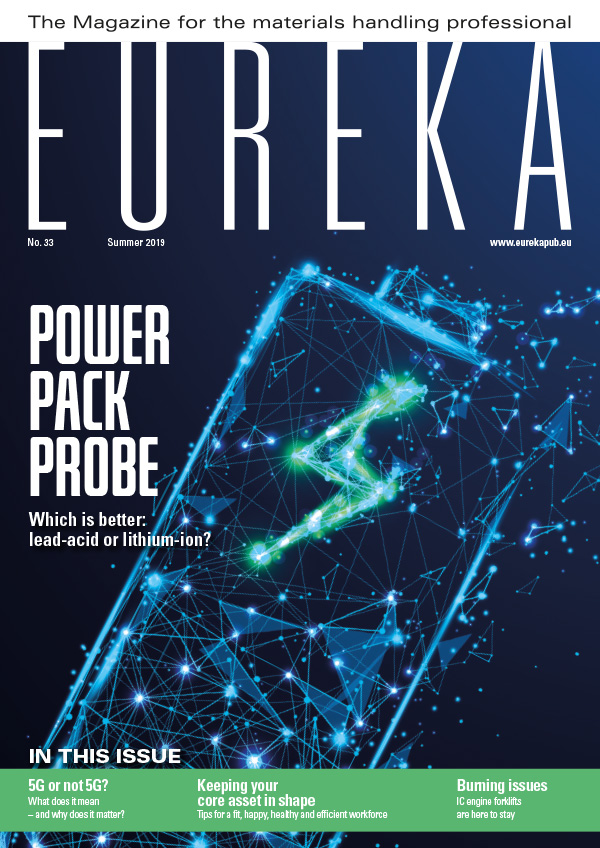 This article appeared in the 2019 Summer edition of eureka magazine.

The rise of the logistics manager

How to choose a power pallet truck

What are the #trends for #logistics and #materialshandling in 2022? 2021 saw several trends accelerate in response… https://t.co/3Y6o0T8iPY

Did you know Friday 21st is International Hug Day? It is scientifically proven that hugging your loved ones makes y… https://t.co/RznJiTjgf8