Home / Technology / Rise of the drones

Rise of the drones

The potential of unmanned vehicles in logistics and warehouse management has been talked up a lot in recent years  but what is the reality? Ruari McCallion has sent out scouts.

If the stories had turned out to be true and the reality had matched the enthusiasm, our skies by now would have been filled with low-flying unmanned aerial vehicles (UAVs) or drones, ferrying items the ‘last mile’ from mobile transport to consumer.

However, our skies are not buzzing with four-propellered flying machines carrying everything from groceries to Amazon books, auto parts and customised components; they are still most likely to be found in the toys section of a department store than waiting at your door.

That is not to say there have been no developments; rather, that enthusiasm collided with reality and some rethinking was necessary before drones – flying or ground-based – started growing into roles that materials handling operations, logistics and warehouse management could usefully invest in.

UPS and DHL have been actively considering the use of drones in order to extend the reach of delivery vans. Mercedes-Benz undertook a trial using two vans complemented by drones to carry out deliveries in Zurich, Switzerland, to customers who placed orders on Swiss online shopping platform Siroop. Around 100 flights were made without any issues and more are planned for 2018. However, there is a school of thought that says last mile deliveries may turn out to be less useful than originally predicted.

“There are some test cases of drones being used for last mile, such as the Starship Enterprises project trialled in London to deliver fast food, but there are many issues which make this application impractical,” said Robert Garbett, founder and Chief Executive (CEO) of Drone Major, an online platform that brings together drone suppliers, customers, software developers and other interested parties. “This application seems to have captured the imagination of the media but this really is the least valuable use of drones and, until smart cities are developed to enable drones to easily access every household, will struggle to take hold.”

The operator can see the captured data on the tablet in real time and can interact with the drone. 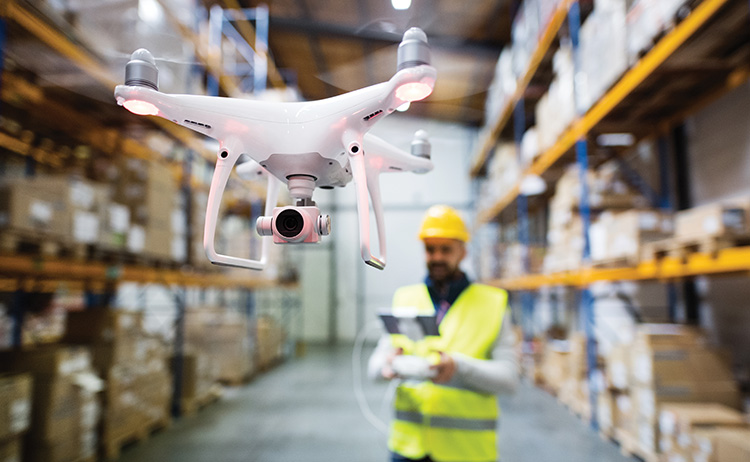 A drone with a scanner can save a lot of time in stocktaking.

New and growing roles for drones are to be found in warehouse and inventory management, which is an area in urgent need of significant improvement. Walmart is just one company that has found, to its significant cost, that it is hard to keep an accurate track on stocks in today’s huge warehouses. In its case, some storage facilities are nearly the size of 20 football pitches. Walmart reported that, in 2013, it lost US$3 billion in revenues because of mismatches between inventory records and actual stock. Mismatches can go undiscovered for some time, only being revealed when a customer asks for something that, it turns out, is not actually there – or, at least, cannot be found.

Inventory tracking was supposed to have been revolutionised with RFID (radio frequency identification) tags, which can report their position to a scanner some distance away. While RFID technology is faster and more effective than a barcode-based manual system, it has become clear that it is not perfect. Tags can be obscured; they can be too far away from a hand-held scanner to react properly – or at all. Manual checking is still a necessity in some warehouses and, in a large store, it can take anything up to three months to complete a full inventory review. 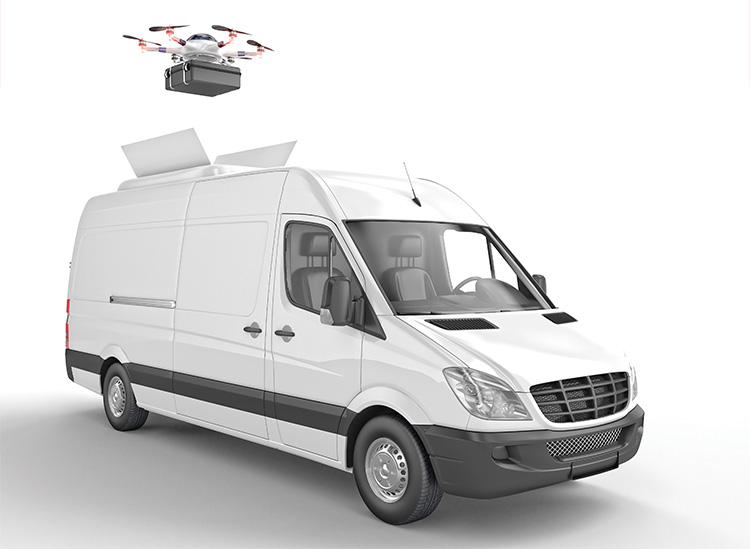 Necessity is, famously, the mother of invention and drones are being upgraded and equipped to provide better inventory management, cut the time taken for stocktaking and greatly improve accuracy – thus cutting losses. Researchers from MIT (Massachusetts Institute of Technology) have developed a system that enables small aerial drones to read RFID tags from tens of metres away while identifying the tags’ locations with an average error of about 19 cm. The researchers envision that the system could be used in large warehouses for both continuous monitoring, to prevent inventory mismatches, and location of individual items, so that employees can rapidly and reliably meet customer requests.

French company Hardis is already in the field. Its EyeSee system, which received an Innovation Award at CES 2018, was launched in a logistics version in January 2018. The whole package includes: a flying drone equipped with a system to automatically capture and identify barcode data; a business application for tablets to automatically monitor flights and captured data; and a back-office application using Amazon Web Services (AWS) cloud computing for administration, configuration and simple integration with all the WMS (warehouse management systems) and ERP (enterprise resource planning) software on the market.

In operation, an operator drops off a drone at the entrance to each aisle. The vehicle starts checking the inventory according to a predefined flight plan. The operator can see the captured data on the tablet in real time and can interact with the drone if, for example, it can’t find a code to scan. Simple to implement, with no need to adapt infrastructure, Hardis says that EyeSee is at least five times faster than checking with cherry pickers.

New and growing roles for drones are to be found in warehouse and inventory management. 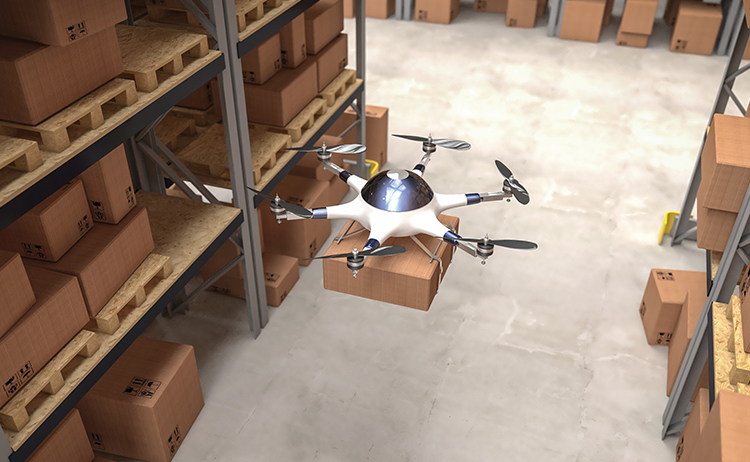 If the practical obstacles can be addressed, there is clear scope for drones to boost warehouse efficiency.

“The use of drones within both warehouse management and logistics is part of a larger evolution within the supply chain to constantly be upping its efficiency and ‘tick along nicely’ 24 hours a day, 7 days a week, all year long,” said Chris Tozer, Territory Manager (UK, Ireland & Italy) at Ivanti Supply Chain, who also believes that the trend is to improve personnel productivity. “The direct implication of technological innovations and evolutions such as the use of drones in the supply chain for warehouse management and materials handling is increased efficiency, as humans are able to perform their jobs faster and more accurately with mechanical help.”

Operating systems are taking a ‘great leap forward’ necessary to improve and extend practicability. Tozer points out that Telnet-connected picking devices are being upgraded from Windows CE (which is due to go end of life in 2020) to Android, leading to increased functionality which can be customised to the users’ needs.

Argon Consulting reckons that aerial drones are even more efficient than Hardis claims, and says that two camera-equipped drones could scan and stocktake a warehouse with 25,000 references in two days; a task that would take up to 100 people to accomplish in the same time. Garbett sees drones definitely replacing human beings in a lot of warehouse management activity.

“Warehouse applications for drones are advancing rapidly as there is an obvious cost benefit against using manpower for almost everything from the management of stock to the security of the warehouse,” he said. “Warehouse operations is one of the areas where drones could be used extensively to replace rather than complement a human workforce traditionally used to manage and move the stock around.  Of course, the workforce would then shift to the manufacture, maintenance and repair of the increasing drone fleet.” Garbett also maintains that advantages are not restricted to aerial devices.

“The use of ground-based drone systems in an environment mixed with manned vehicles would seem problematic but advanced ‘sense and avoid’ systems are now available, which make such operations safe and efficient without the need to change the environment in which they operate, or the manned equipment,” he concluded. 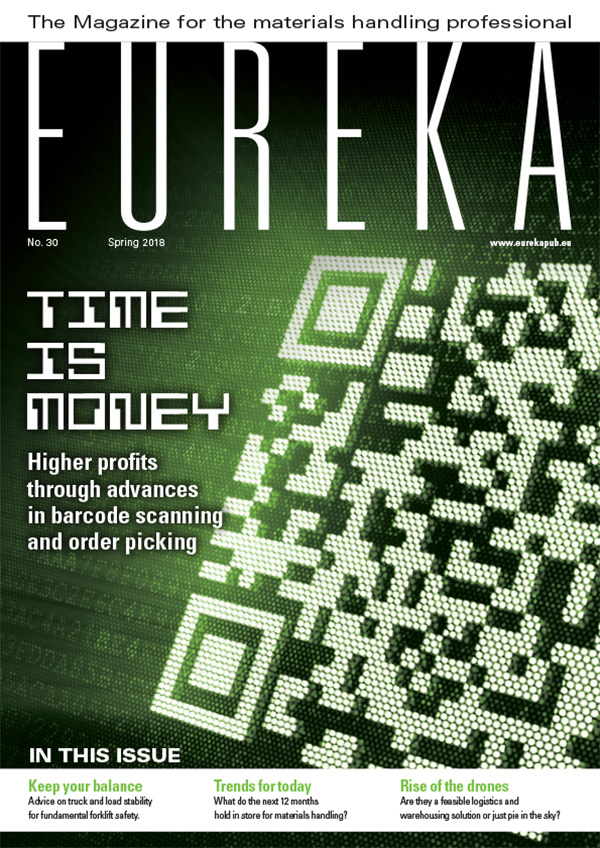 This article appeared in the 2018 Spring edition of eureka magazine.

#ForkliftFact: The age-old quest to combine effective traction, damping and stability in power #pallet trucks has b… https://t.co/0SBAWrfJjR

Are your staff equipped with everything they need to operate safely and efficiently this winter? Here are our top t… https://t.co/WMFJQ33fs9